How to make Pure Data patches for PdDroidParty

As well as the supported internal objects listed above the following abstractions work in Pd and are emulated natively on the device. Load the file droidparty-abstractions/_OVERVIEW.pd for more details and specific usage:

You can connect your MIDI controllers and keyboards to your device running PdDroidParty and use them to control your patches with Pd's built-in midi objects like [ctlin] and [notein]. You will probably need an OTG USB cable to plug in your MIDI devices and Android version 2.4 or higher. Once you have plugged in your MIDI device and loaded a PdDroidParty path, use the menu to enable access to the device in the software. 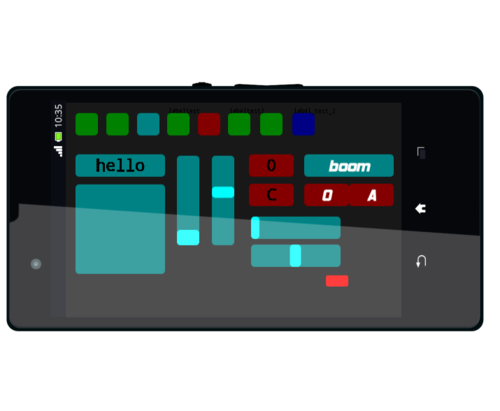 To theme e.g. the toggle, create an SVG called Toggle.svg in the directory holding your droidparty_main.pd patch. You can also have separate images for specific toggles by using their send name or label name in the SVG filename. For example a toggle with a send name of "mysend" could have an SVG called Toggle-mysend.svg which would override the default Toggle.svg image. Send and label names are split on the hyphen ("-") character so for example if you have two toggles with send names of mysend-1 and mysend-2 you could theme them separately with Toggle-mysend-1.svg and Toggle-mysend-2.svg or you could theme them with the same image by creating a file called Toggle-mysend.svg which would apply to both.

The SVG renderer is not very robust, so the best way to design your own widget graphics is to start with the widget graphics in droidparty-tests/svg-widgets/*.svg and modify them. The renderer only really works on plain paths, so make sure you convert any objects like rectangles or circles to plain SVG paths. The renderer used is a fork of svg-android with some support for Inkscape hacked in.

You can put three special attributes on the SVG element using a text editor, for font customisation. They are textFont, textColor, textOffset and textAntialias. textOffset is a relative value like "0.25 0.25" which will move the text down and to the right relative to the center of the widget being drawn. textFont should be the name of the font file excluding the extension. textAntialias should be "true" or "false". textColor is a hex string like "#ffffff".

It is possible to map only a part of the main Pd window to the actual device screen, by using a specially configured canvas GUI:

The selected viewport area will be rescaled in order to fill the screen of the device.

See droidparty-demos/pure-widgets-demo/droidparty_main.pd for an example of this feature.

You can share your PdDroidParty compatible patches with people by zipping up the folder with your patch in it and renaming the file extension from .zip to .pdz. When you send a .pdz file to somebody PdDroidParty will launch and run the patch on their device if they have the app installed. You should make sure the zip file contains the top level directory with the name of your patch, for example MyPatch.zip should contain a folder called MyPatch which contains your files like droidparty_main.pd etc. You can also include a Pd comment with the text "version: 99" to set the version of your patch so that people receiving them will know what version they are being asked to install. Each time you release a new version of your .pdz file you can increment the version number.

If you want to prevent the app from asking for record permission for your patch you can add a subpatch like pd config and put a comment inside the subpatch like PdDroidParty.config.norecord 1.

You can convert your pure data patch to an Android app using the online service or by doing it yourself on the command line.